A brief history of St James’ with St Peter,  Islington

The original Church of St James’ nestled close to the old Roman London Wall in Monkwell Street and the crypt had Saxon and Norman remains. An early record describes how a new Hermitage had been built in the reign of Henry III but the patronage changed hands on several occasions, from the crown to the Lord Mayor of London and eventually to the Cistercian Abbey at Girondon in Leicestershire. After the Dissolution of the Monasteries, the chapel of St James in the Wall was acquired by William Lamb, a gentleman of the Chapel Royal, for the sum of £632.17.1d. In medieval times, the land on which our church stands was owned by the Canons of St Paul’s Cathedral – reflected in the names of surrounding streets, Prebend Street, St Paul Street, Canon Street, Rectory Street and Bishop Street. 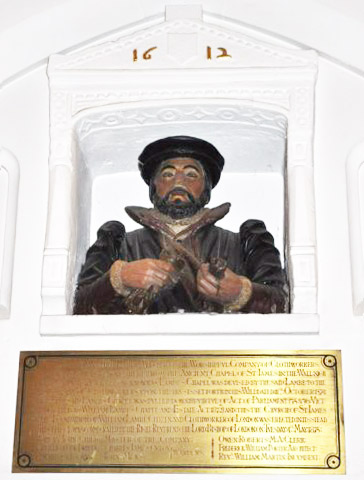 Lamb became Master of the Clothworkers in 1569 and on his death at the age of 85 in 1580, he bequeathed the Chapel to the Company on the understanding that his former colleagues would attend one service a year, robed in their livery gowns. On that occasion shoes for 12 poor men and 12 poor women were also to be distributed.

In 1820 the Company made the decision to close Lamb’s chapel (as it had become known) and it was demolished, along with the attached almshouses. Both were rebuilt on Clothworkers’ land in the emerging suburb of Islington. The foundation stone of the new Church, designed in Early English style by the Company architect, FD Porter, was laid on 25th July 1873. The Clothworkers’ Company had acquired the land during the reign of Henry VIII. Above the internal west door to the Church you will see a small effigy of William Lambe.  St James’ owes much to him and his Company.

In his speech the Master, John Bazley White said the building of a new Church was not for ambition or grandeur but so that ‘the pure and undefiled gospel could be preached until we and our children are no more’.

The limited size of the building plot was not the only constraint on the construction of St James’. Built by Dove Brothers of Islington for the sum of £8,400, funds were limited and the original baptistery was never completed. Unable to afford an organ, the congregation were accompanied by a harmonium. The original ring of six bells was the personal gift of Baroness Burdett-Coutts.

On 5th May 1875 St James’ Prebend Street was consecrated by the Bishop of London, John Jackson. The external walls were dressed in Kentish rag stone and the plain Bath stone interior was relieved by limestone columns. The octagonal east wall was decorated with earth coloured polychrome bricks and featured the Creed and the Ten Commandments.

For some reason there are no parish magazines of any description from this period apart from one dated 1934 and a chorister’s magazine (‘Choristers Chirping’) marked December 1943. Both suggest that St James’ was a flourishing parish before the second world war. With four Sunday services to lead, Fr McLaren was assisted by a curate and a Church worker. There were twenty servers. Scores of clubs and societies met at the Mission Hall in Britannia Row including a champion table tennis club and a girl’s drill class! 16 candidates were confirmed in 1941. In 1956 there were also a Church Army Captain and two sisters. The organ, originally by Gray and Davison, had been rebuilt by Monk and Gunter in 1938.

Yet by 1958 the future of St James’ looked much less secure. All over the Borough churches were being closed. Locally St Philip’s, Linton Street had been combined with St James’; St Bartholemew’s Shepperton Road had been split between St James’ and St Stephen’s Canonbury and St Matthew’s had been amalgamated with St Peter’s Devonia Road.

By the time the Australian, Cuthbert Powell, had become Vicar of St James’ in 1960 it was clear that the generosity of the Clothworkers’ Company was beginning to run out. Their patronage had involved substantial grants for repairs to the Church roof and the running of the halls and they offered no objections to the 1968 Diocesan Pastoral Measure which would have declared St James’ redundant. Congregational attendance was often less than ten and the Vicar of St Mary’s, Prebendary Peter Johnstone, Chairman of the local Pastoral Committee, was writing frequently to the local press arguing that Islington had far more churches than it needed.

Cuthbert Powell left in 1970 without any retirement party and St Mary’s took control of St James’. During the next nine years only the most limited ministry was provided. No baptisms or marriages were celebrated in St James’; the PCC was disbanded and each room in the Vicarage in Arlington Square was rented separately. Capital from the parish accounts was sequestrated to help build the parish centre at St Mary’s and it was just a matter of time before all the paperwork could be put into place and the closure order announced. When the Clothworkers’ sold the almshouses behind the Church to the Diocese to house retired clergy it was clear that they too intended to withdraw their support.

These plans were not easily enacted however. First the Clothworkers’ were unwilling to end their patronage until St James’ was actually declared redundant. Then, faced with massive repair bills and a falling congregation, the PCC of St Peter’s in Devonia Road wrote in support of the small group who were tirelessly lobbying the Church Commissioners to stop the amalgamation of St James’ with St Mary’s. They pointed out that the fabric of St James’ was in much better condition than their own Church, the PCC possessed far greater financial reserves and St James’ also had its own Vicarage. It would be far better to close St Peter’s than St James’.

With the encouragement of Jim Thompson, Bishop of Stepney, the PCC members of St James’ and St Peter’s began to work more closely together. In June 1978, the first PCC at St James’ since 1970 heard that the Pastoral Scheme was to be withdrawn and it was understood that when Peter Wildridge resigned as Vicar of St Peter’s, the two churches would merge.

Still St Mary’s was unable to offer pastoral support and the joint PCCs were therefore glad to hear from the bishop that he had asked Fr Jack Holden, a newly retired mission partner from Guyana, to serve as acting priest in charge to the two churches after Peter retired. Finally in March 1982 Bishop Jim licensed Fr Geoffrey Marlow to St James with St Peter Islington. Five years later he became Vicar and the Church in Devonia Road was sold for redevelopment.

Shortly after Fr Marlow was inducted as the new Vicar, and knowing that the future of St James’ was secure, the Clothworkers’ Company made it known that they wished to finally relinquish their patronage. Aware that the parish was planning a major refurbishment of the sanctuary and the rebuilding of the organ, they generously agreed to pay for the majority of the work before their association with St James’ was terminated. A special service of rededication, presided over by Bishop Jim, was held on 25 February 1990.

Over the last twenty five years St James’ has seen yet more change. In association with St John’s RC Church in Duncan Terrace a night shelter, Shelter from the Storm, was opened on a regular basis in the new Hall. By 2009 the numbers using the facilities had exceeded its capacity and the charity has now established itself in new premises near King’s Cross, the only night refuge in north London opening daily throughout the year.

Over the last ten years the local housing stock has also been transformed. The so called slum-clearance of the 1960s which saw the replacement of the substandard Victorian terraced housing with prefabricated flats arranged over six floors, is in turn being redeveloped in a £130million pound scheme. 538 flats are being replaced by 791 mixed tenure low-rise houses and flats. Many of the local community have been rehoused within the scheme but there has also been a large influx of new residents throughout the parish and the high proportion of people aged 25-35 as noted in the 2011 census is likely to have increased substantially.

This is an edited version of ‘St James’ Church, Islington – A History’ by Peter Baugh.

More information can be found on St James’ Wikepedia page. 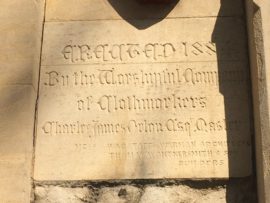 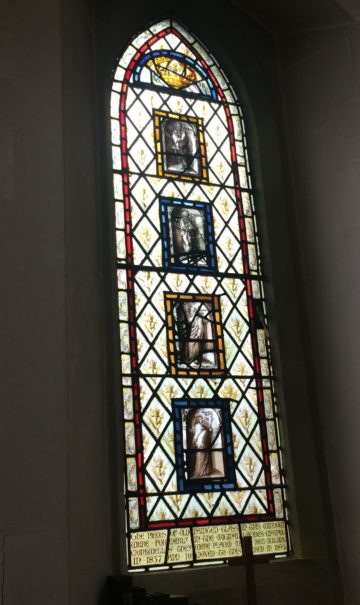 Window in the north chapel from Lamb’s Chapel 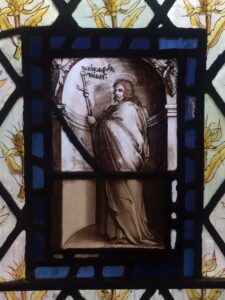 Detail from window in North Chapel 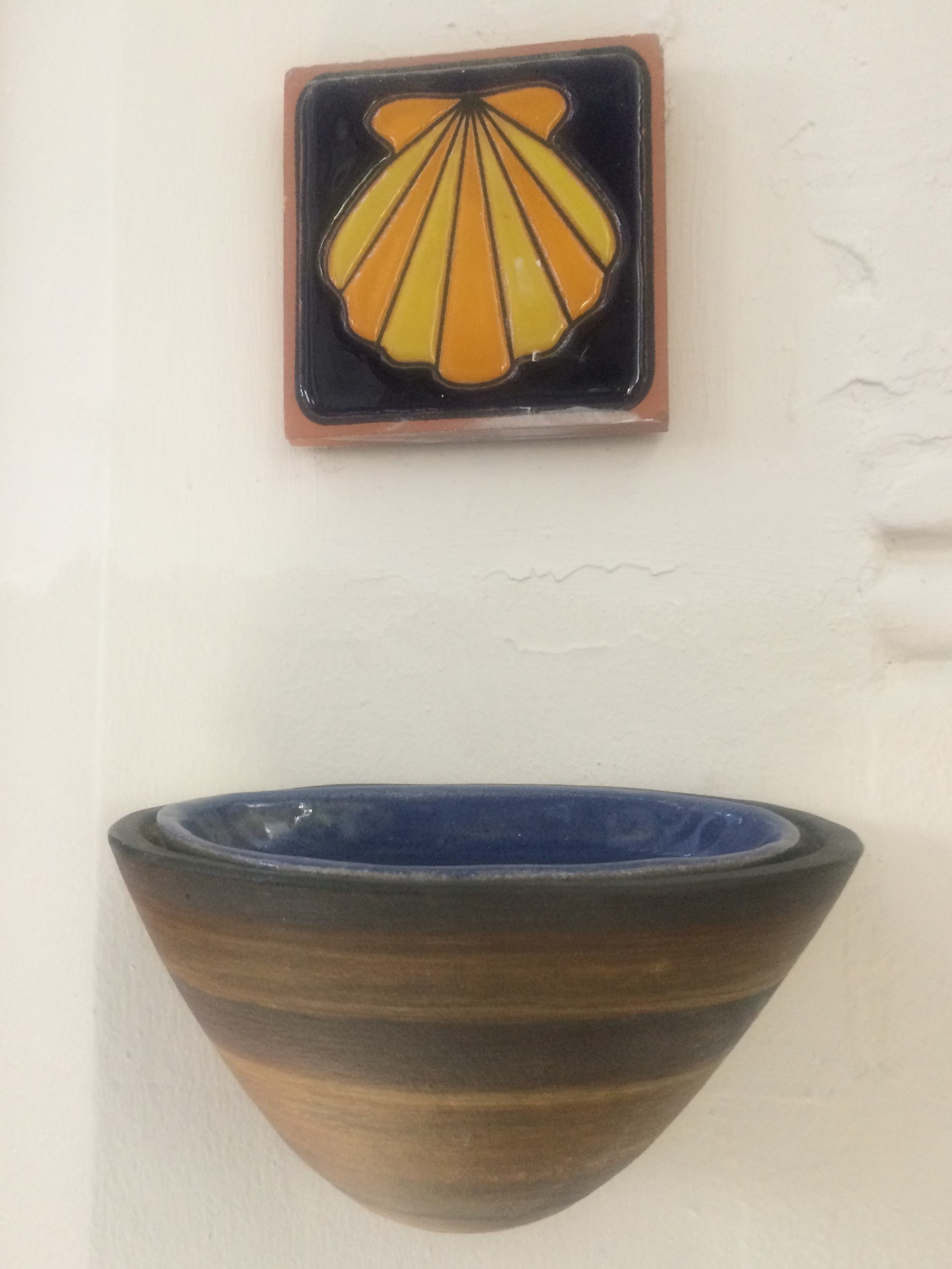