The Bells and St James’

A ring of 6 bells (7cwt) was donated by the benefactor Baroness Burdett-Coutts and installed in the small tower at St James’ when the church was built in 1875. The ringing room was reached by a vertical ladder against the wall and arrangements within the ringing room made ringing difficult. It is thought that the bells were used fairly regularly until the early 1950s when loud-speakers were installed in the tower, linked to a gramophone which played recorded bell rounds.

In 1985, after some restorative work, a Quarter Peal was rung on the first anniversary of the death of the Church Verger, Fred Welling, who had been murdered.

In 1989 the whole ring was sold to St John’s, Whittington in the Diocese of Lichfield and a new, slightly lighter ring (5 cwt) was cast at Whitechapel Bell Foundry, donated by the Tower Captain, Jo Barton, in memory of her mother Pamela Mount. These were later blessed by Fr Geoffrey Marlow and given the names Peter, Matthew, Philip and James (after the four churches which had been united to form the present parish), Pamela Mount and Baroness Burdett-Coutts.

The ringing room was refurbished at the same time, a more practical staircase installed as well as electrically-operated soundproof shutters, which are used during practice and other ‘non-service ringing’.

There has been an active band of bell-ringers at St James’ since that time. A group regularly meets before the Parish Mass to practice change-ringing on handbells – another fascinating aspect of The Exercise (as ringing is known).

The ringers warmly welcome visitors, either to join the ringing or just to see what goes on – St James’ is a good teaching band! 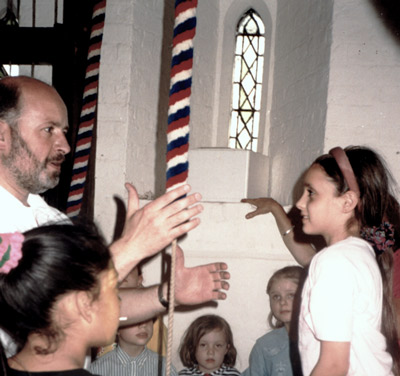 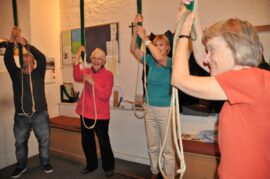